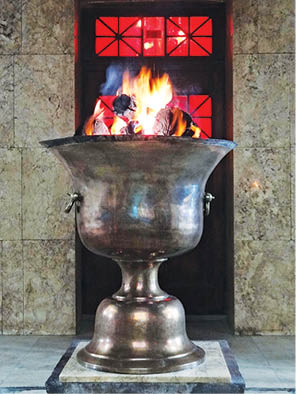 Intolerance and bigotry and dogmatism are the bitterest enemies of religion upon earth. They make religion a tyrant, a persecutor, a veritable daeva, the demoniac perversion of angelic religion.

All bigotry is blind and stupid and savage. Sectarian bigotry is as bad as inter-religious bigotry. Bigotry stifles reason and the bigot, in his frenzy, is out to force all to believe what he believes.

All religions come from one and the only God, who makes himself known by many a name. From the same source, like the tributaries of a river, they flow. All religions make man equally good upon earth and with equal safety do they conduct his soul to heaven. One alone is truth and all religions teach this truth, for religion itself is truth.

Man has no right to demand that his neighbor shall address God after his pattern and shall pray in his own way and worship according to his liking and sacrifice unto God in the manner he does.

No thinking man’s own idea of God and religion, at all times and in ill conditions of life, is ever the same. For everybody’s views on religion, then, it is not possible ever to be alike. Monotonous would our world become, if all thought equally and in the same way without ever differing in religious beliefs and practices from one another. Nature shines in her luxuriant glory because of the wide variety of her form and colour and beauty. So do there bloom and blossom in the garden of the spirit pervading mankind, foliage and flowers of all shades and grades of devotion and religious emotions.

Teach me, my God, to see that I have no right to impose my own way of thinking upon others. Teach me to acknowledge and honor the right of all to pray and worship and sacrifice in their own way. Let me not be a purist and regard those as irreligious who regard not formalism. Keep me free from sectarian spirit, and give me strength to root out from my heart bigotry and fanatic zeal. Teach me to discern true religion from religiosity. Fill my mind and heart, Ahura Mazda, with the spirit of toleration.