Why Are BPP Elections For 2 Vacant Seats Being Constantly Postponed???

For over a year now, all crucial community decisions, which are meant to be made by a Board of Seven BPP Trustees, are made by just Three so called ‘Majority Trustees’ – Chairperson Armaity Tirandaz, and Trustees Viraf Mehta and Xerxes Dastur.

The vital and balancing inputs, opinions and recommendations of Trustees Noshir Dadrawala and Kersi Randeria, who comprise the Two Minority Trustees (in this fractured and incomplete Board of Five Trustees), go disrespectfully unheeded. This has been greatly compromising the welfare of the community – which is the very reason for which the BPP Trustees are elected in the first place.

What is even scarier is the common knowledge that the ‘Majority Trustees’ are allegedly dancing to the tunes, or rather diktats, of an external entity, who had earlier, allegedly abused his position as a BPP Trustee… and despite not being part of the current BPP Board, ensures to get his way through these three proxies, who he played a primary role in getting elected as Trustees.

The community deserves a full Board of Seven Trustees, but despite all efforts to hold elections for the instalment of the two missing Trustees so that a full Board can once again be restored, the Three Majority Trustees seem to have done everything in their power to ensure that elections are repeatedly postponed. Because that would take away their ‘majority’ and their power from the decision-making process… in keeping, perhaps, with their loyalty to their Trustee-Maker!

The following timeline shares the precise sequence of events which clearly exposes the mala fide intentions and efforts of the Majority Trustees – Armaity Tirandaz, Viraf Mehta and Xerxes Dastur – to not allow conducting the BPP Elections:

December 2020: Chairman Yazdi Desai resigns so that elections for 2 seats can be conducted simultaneously and the BPP would not have to incur the cost of an additional election.

9th March, 2021: Just 4 days before the Elections, the three Majority BPP Trustees – Armaity Tirandaz, Viraf Mehta and Xerxes Dastur – arbitrarily decide to postpone the Elections, supposedly for the next two months. This is how it unfolded:

9th March, 2021 – at 4:30 pm: A meeting was organised at the BPP for all the candidates, for a demo of the EVM machines which were to be used at the Elections, scheduled 4 days later. 25 persons were present at this hour-long meeting. All BPP Trustees, the Election Commissioner and his team, the IT team, the Auditors monitoring the EVM, all the candidates, senior BPP staff and Dinshaw Mehta (who was representing candidate Kersi Sethna) were present. In this meeting, the three Majority Trustees – Armaity Tirandaz, Viraf Mehta and Xerxes Dastur – were present and had participated, yet, none of them gave a hint that in the next half an hour, they would be passing a resolution in their Board Meeting postponing the elections!!!

9th March, 2021 – at 6:30 pm: At the BPP Board Meeting, just half an hour after the Election meeting ended, Armaity Tirandaz, Viraf Mehta and Xerxes Dastur passed a Resolution to postpone the Elections. They issued circulars to the Baugs informing them of the postponement. The 3 Trustees informed the EVM/IT teams, the decorators, etc about their cancellation.

12th March, 2021: Trustees Kersi Randeria and Noshir Dadrawalla filed an Appeal before Justice Kathawalla, who, by consent of all parties involved, set the date for the next Elections as on the 23rd of May, 2021. The Order stated that only if there is a lockdown due to Covid will the Elections be postponed and for no other reason.

6th April, 2021: Armaity Tirandaz, Viraf Mehta and Xerxes Dastur, yet again abuse their ‘majority voting power’  and resolve to postpone the Elections scheduled for 23rd May, 2021, in the Board meeting.

7th April, 2021: The 3 Majority BPP Trustees informed the High Court of their decision to postpone the Elections scheduled to be held on 23rd May, 2021. The Court directed the Trustees to propose a New Program of Elections, including a New Time Line, before April 30th, 2021.

Till Date – As of Today: The Trustees have not honoured the Direction of the Court to file a new schedule of Elections before 30th April 2021. They are, therefore, in Contempt of Court Orders.

On Tuesday, 5th October, 2021, thirteen beneficiaries / community activists went to the BPP to question them on the reasons for delaying the Elections for the 2 vacant BPP Trustee seats. The 3 Trustees present at the meeting were Chairperson Armaity Tirandaz and Trustees – Kersi Randeria and Viraf Mehta. A letter signed by the 17 beneficiaries / community activists was submitted to the Trustees. [The letter is published on Pg. 2].

At this meeting, with the 13 beneficiaries, Chairperson Armaity Tirandaz was asked to respond to the issues and points stated in the letter. She replied saying she needed to ponder on these points!! All the points raised in the letter have been discussed and debated in earlier Board meetings for hours on end, and yet the Chairperson unfortunately needs a few days to ponder on these issues before she can respond! 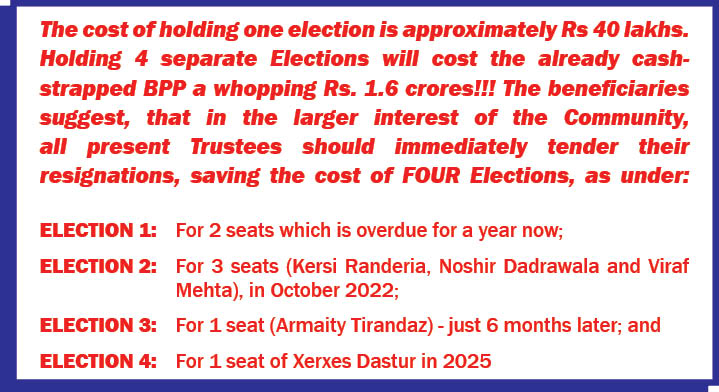 Trustee Kersi Randeria stated that he and Noshir Dadrawalla have approached the High Court to hold the Elections.

Holding 4 separate Elections will cost the BPP Rs 1.6 crores, which is a phenomenal expense for an impoverished BPP which is presently unable to honour its financial commitments towards paying for 2nd and 3rd child; Contactors, Gardeners and Security personnel; as well as overdue refunds.