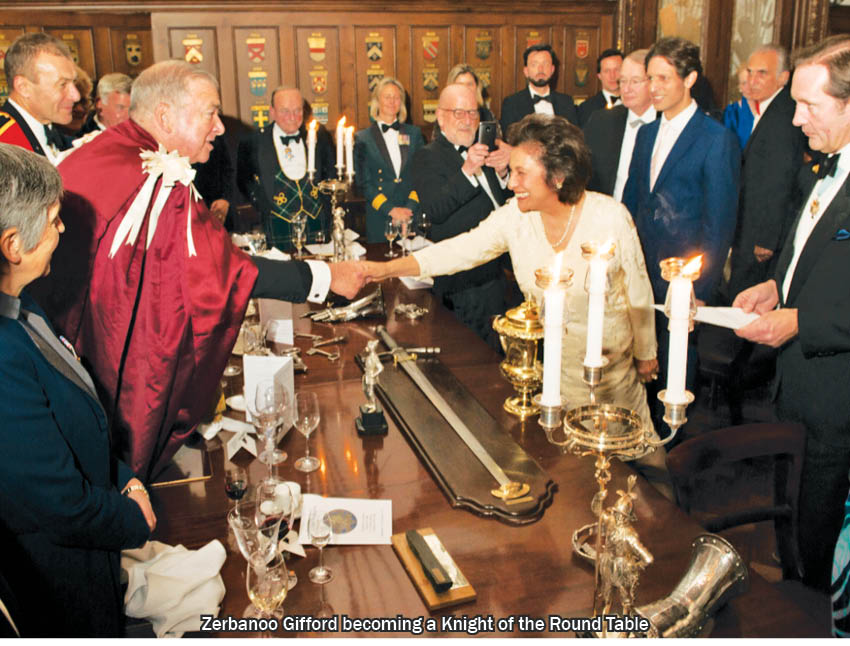 Zerbanoo Gifford is one of our worldwide Zoroastrian community’s most inspiring, fearless and kind-hearted personalities. Quick witted with a magnetic aura, she motivates and facilitates individuals to achieve their dreams, setting the precedent herself! Parsi Times Special Reporter – Binaisha M. Surti, brings to you an exclusive interview with Zerbanoo Gifford and her splendid, inspirational journey comprising her formative years, the ASHA Centre, her newly launched ZASHA website, and lots more…

Zerbanoo Gifford has the unique distinction of being one of our community’s most dynamic, admired, respected and loved trailblazers – and a renowned champion of women’s equality across the world.  An award-winning Human Rights campaigner, Zerbanoo is also an author and the founder of the magnificent ‘ASHA Centre’ in Britain, which works for the enrichment and empowerment of young people worldwide.

Although Zerbanoo has achieved much success in her endeavours and is the proud grandmother of four grandchildren, she remains an unstoppable force in her passion to transform lives for the better. Her gigantic body of humanitarian work spans fifty years of consistent and undeterred global activism, right from the grassroot level.

A woman pioneer in British politics, she is the former Director of Anti-Slavery International – the world’s oldest Human Rights organization. In 2007, she received the Splendor Award in Hollywood for her lifetime achievements. She was honoured at the 90th Anniversary of American Suffrage by the Sewall-Belmont Museum in Washington DC, in an exhibition commemorating key women who have advanced Women’s Rights. Recently, Zerbanoo was also the recipient of the ‘Social Entrepreneur Award 2022’, at the 12th World Zoroastrian Congress, held in New York.

“Social entrepreneurs are change-makers who are determined to make things better. We want things to change for the good. For me, the greatest honour was to be recognized by my own beloved community,” she said on the occasion, adding, “I have never experienced something so magical, being in a room with 1,200 Zoroastrians from all around the world. I do not think that I will be in a room with so many Zoroastrians again! The FEZANA Committee and especially its President, Arzan Wadia have been outstanding!”

Growing up, Zerbanoo was greatly influenced by strong women, including her gracious mother and her very special grandmother – Gover Irani. Zerbanoo was named in memory of her late maternal grandmother, ‘Jerbanoo’. Her father believed it was late Jerbanoo who sent baby Zerbanoo to them as a divine gift!

Zerbanoo’s parents – Bailey and Kitty Irani came to Britain in 1951. Her father was the Founding President of the World Zoroastrian Organization and the President and Trustee of London’s ZTFE (Zoroastrian Trust Funds of Europe). Having spent part of her earlier childhood days with her grandmother in Pune, Zerbanoo recalls how her ‘granny’ taught her the navjote prayers. “Granny instilled in me the understanding how Zoroastrians follow a proactive, magnificent religion. We have free will to follow the righteous path of Asha and to help transform our world with our ‘Good Thoughts, Good Words and Good Deeds. One can also choose to be apathetic and just give up and do nothing. It’s all up to us. But let’s never forget that there is no escaping the consequences of our actions,” she shares.

Compassion came naturally to Zerbanoo even as a 7-year-old. She remembers complaining to her parents in London, about the sad plight of children going hungry in Pune. When her mum asked her what she would like to do about it, she said she would collect money for them. She narrates the interesting story, “My aunty Mappie was married to Air Marshal Edul Dhatigara, who at the time worked with ‘Hardy Amies’ – dressmaker to Queen Elizabeth. He’d save the leftover material from the Queen’s outfits to make outfit for my doll. I asked him for spare material and made little flags which I sold outside our hotel in London and ended up collecting £10 (Pounds), which was a great deal of money for a little girl in those days. I wrote a letter to Pandit Jawaharlal Nehru from London saying the money was for the poor children of Pune. He wrote back, thanking me and saying that if every girl collected money and thought of poor children, there would be little poverty in the world.”

Life came full circle as years later, Zerbanoo was honoured with the Nehru Centenary Award for her work championing the rights of women, children and minorities internationally. Her steadfast belief that the secret to success lay in hard work, kindness and courage – in other words, by walking the path of ‘ASHA’ – also took shape as her greatest legacy – the ASHA Centre, located in the Royal Forest of the Dean in England. 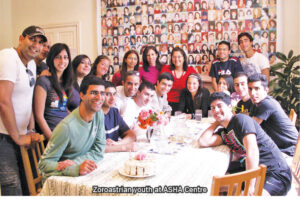 The ASHA Center is a haven of serenity, where people receive inspiration and connect deeply with nature, each other and their higher selves. It is here, that once can truly experience the principals of Zoroastrianism and Asha, at work. The house and the gardens are stunning, surrounded by 5,000 roses and tulips, in memory of her father who loved roses. The grounds are designed along the lines of a Persian paradise garden, with fruit trees and vegetables. There is also a sacred stream that goes through the grounds from St. Anthony’s well in the forest. Thousands of people come to visit the ASHA Center and leave feeling inspired, spiritually enriched and as a better version of themselves.

In 1982, Zerbanoo made history by being elected as a Liberal Councilor in Harrow, the first BAME (‘Black, Asian and Minority Ethnic’) woman to stand for Parliament. She faced much resistance from British National Party because of her background but she stood tall and firm to fought through challenges, with the support of her husband – Richard and her father Bailey, to finally emerge victorious and make her mark on history! She remembers and cherishes her father’s words, “Courage has done greater things than charity. It’s not just your sympathy for others, but your bravery to stand up to the bullies that has changed lives.”

Thus, 40 years ago, Zerbanoo trailblazed her way to break through the glass ceiling, with her entry into British politics and today, Britain has many politicians from different backgrounds, coveting even Prime Ministership, irrespective of race and gender.

Recognizing and honouring her magnificent body of work and efforts, Zerbanoo was initiated into the prestigious ‘Knights of the Round Table’, on the 100th anniversary of Women’s Suffrage in Britain, in 2018. While Dame Cressida Dick, Head of the Metropolitan Police, provided the key-note speech at the inaugural dinner, Admiral Lord West, alias King Arthur, welcomed Zerbanoo into the ancient Order of the Knights of the Round Table – a rare honour for a woman to be welcomed into Camelot!

Constantly working towards the upliftment and celebration of women, at the 12th World Zoroastrian Congress (WZC) 2022 in New York, the generous Zerbanoo gifted the ZASHA website to our global Zoroastrian community, which highlights hundreds of inspirational Zoroastrian women. “This idea struck me while I was meditating. I realized we needed to bring together all the magnificent and extraordinary Zoroastrian women from all over the world, who have excelled in different fields and who work tirelessly for our community and the wider world. I started talking to them, getting their biographies and photographs. All of them are doing so much and we have no idea about the pool of Zoroastrian talent around the world! The ZASHA website gives our women a platform to connect with each other and work across disciplines. We need people to interact with the website to make it vibrant,” shares Zerbanoo.

Zerbanoo recently authored the book, ‘Z To A Of Zoroastrianism – Ancient Wisdom For Modern Living’, which has been a huge hit at the 12th WZC and has been receiving rave reviews from Zoroastrians across the world. It is dedicated to the memory of her Kitty, who always wanted a simple book to be written that would explain the wonderful Zoroastrian religion, not just to our community but to the world.

Zerbanoo, meaning ‘golden lady’ in Persian, shared her greatest moment of pride with Parsi Times, “I was told, Nelson Mandela kept my photograph on the wall of his prison cell, alongside those of people who were fighting the Apartheid. When he was released, I learnt that my picture was one of the few that kept him going during those terrible times. I had been chosen to present a massive petition from the British people to Mrs. Thatcher at 10 Downing Street, calling for full mandatory sanctions against Apartheid in South Africa, and the release of Nelson Mandela. He knew that I cared and was determined to help end apartheid, that plagued our world.”

Speaking about another area that she is deeply passionate about – the Zoroastrian youth – Zerbanoo says, “I would like to see every Zoroastrian organization in the world have young people to help lead our community. The younger generation brings new energy and ideas. We need to support and allow them to be forward thinking and inspiring leaders. Our resources should be directed to their development. New dynamism and creativity are vital for any organization or thriving community, as ours.”

Zerbanoo’s extraordinary life symbolized with integrity, achievements and giving, is an inspiration to many the world over, in addition to our community. Parsi Times wishes Zerbanoo abundant success in all her future endeavors!