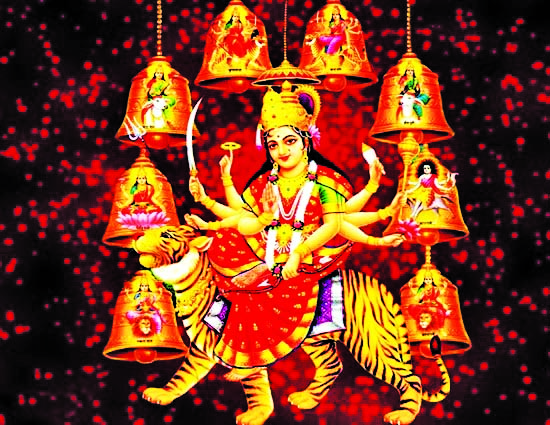 According to Hinduism, our Earth passes through various cycles, as per mankind’s mental conditioning and consequent actions (karma). These cycles (Yugas) are, Sat-Yug, Treta-Yug, Dwapar-Yug and Kal-Yug (which we are passing through now). Lord Ram was the seventh incarnation of God Vishnu in the Treta-Yug. Since every Yug is a struggle between the forces of good (Devas) and the forces of evil (Asuras), Ramji declared war on Ravan the King of Lanka (Lankeshvar). This was a nine day war, during which Lord Ram prayed to Goddess Durga, attaining victory on the tenth day. To celebrate this, people burnt effigies of Ravan, his son Meghnath and brother Kumbhakaran, thus renewing their faith in Goddess Durga.

Hindus fast and stay awake during the nine nights (Nav-Ratri) preceding Dassehra in memory of this legendary nine days of war, praying for prosperity and goodwill for everyone on Earth. In rural India, people worship tools like ploughs, animals and even vehicles. In cities, we decorate our cars, scooters and cycles with garlands of marigold. Unfortunately, in cities, this festival, like all others, is totally commercialized with Ras-Leela degenerating into Disco-Dandia where women spend obscene amounts on designer ghagra-cholis and dance away the nights in fun and frolic instead of praying to Goddess Durga, who is one of the most important deities of Hinduism.

Goddess Durga is the female aspect of nature and is known by different names by different sects of Hindus. She is Amba, she is Parvati and she is Vasundhara (the Earth-Mother). She has all the personifications of a mother in all religions and all cultures. All civilizations, right from the Egyptian Osiris Goddess, have recognised, honoured and worshipped the female deity, or the female principle in Nature. Every exoteric as well as esoteric religion has personified her as a loving mother, bestowing gifts like Jagadambe (giver of life itself), Saraswati (patron of arts) and Lakshmi (giver of wealth).

These personifications of the World-Mother are among the noblest concepts of the human mind, which, in creating and serving, reaches the highest degree of idealism, devotion and self-expression. The Madonna or the blessed mother of Christ, for example, has been, and still is, of incalculable value in consoling, purifying, and enabling humanity in a similar way, like the Persian Avan Ardvisur Banoo, the Pallan Athene of ancient Greece, Kwan-Yin of China and the Ishtrar of the lost Atlantis civilization. Both – Mayahana and Hinayana Buddhism, have a female Goddess common to these two sects who pray to her for fertility, prosperity and happiness.

In Bengal, Navratri and Dassehra are celebrated with emphasis on Goddess Durga, the 10-armed Devi who rides a lion, armed with Shiva’s trishul, Varuna’s conch-shell, Vayu’s bow, Indra’s thunderbolt, Kubera’s club, Shesha’s snakes, Surya’s quiver, Agni’s dart and Vishnu’s discus, thus symbolizing the strength of all the Gods of Heaven to vanquish the demon Mahishasura. Now a demon in all religions and every mythology is a euphemism for ignorance or negativity since it is only due to ignorance that a human being does something wrong which we call sin. If we can grasp this idea and put it in our day to day life, in our interaction with every person we meet, we could practice the real significance of Dassehra.

The nine nights preceding Dassehra are called ‘Navratri’. Why nine nights? Why not eight or ten?  Because, numerically, just as number one stands for the one cosmic energy, number nine represents the process of creation (the nine cosmic-wombs). A foetus takes nine months to gestate in the womb. There are nine categories in Nature, three of each creation, preservation and destruction. The human body has nine openings as well as nine psychic energy centres. Then again, there are nine gems (nav-ratna) to be used to cure physical and mental disorders in accordance with the aura of an individual. In Indian classical dance forms, there are nine delineations (navras).

And now we come to the most enjoyable part of Navratri – the ‘garba’ and ‘dandia’, which are always danced in a circle to signify diversity in unity and unity in diversity. The circle also stands for the cosmic womb from where all forms of life emanate and where they return on destruction. The singing and dancing denote that life has to go on inspite of everything; and the going round, dancing in circles is a metaphor for the rounds of births and deaths that a human soul undergoes, up until it gets enlightened enough to qualify for salvation.