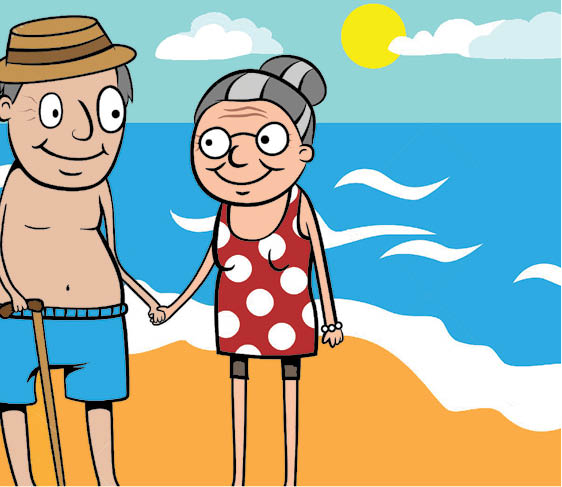 In keeping with the ongoing summer season, PT’s Writer extraordinaire, Dara Khodaiji presents a hilarious Bawaji Travel Story-Series, filled with humour and fun, to kick off that perfect weekend mood!

Sorabji, Perinbanoo’s husband is slurping his fourth cup of tea, children are away for breakfast at a South Indian restaurant famous for idlis, uttappas, dosais and rasam; otherwise God is in heaven and all’s right with the world till Ratimai surfaces from PT and lets out, “Marere, the whole word is going on holidays abroad. Aai jov, aai badhi advertisements offering choice of holidays abroad from Tel Aviv to Tehran to Britain and Budapest, ne aai tamaro bhai Darabsha, like the Sphinx, is rooted in just one place! He stood here when it was Bombay, he stands here now it is Mumbai. He had promised me an exotic honeymoon and all we did was ended up in his gaam Sumari, while all the time I was dreaming of some exotic place like Sumatra or Singapore!” Perinbanoo puts in her two-bit worth -“Aai maro Sorab su, kethe bhi khasakva magtoj nathi.”

Perinbanoo, always on a short fuse, “First of all, don’t you dare sneak in another teaspoon of sugar in that disgustingly sweet brew of yours. Now I’ll tell you ave biju su joiye, we want a holiday abroad! All these years you have been stingily fattening your bank balance while I had to scrape and scrounge.”

“You said it Perin,” Ratimai puts in her two-bit worth. “Ay spinxy Darabsha bhi – always self-indulgent. Always stuck in one place.Let us plan our holidays.ABROAD OR BURST!”

“Ok girls, ok!” says Darabsha, the spinxy pacifier, “let us not go overboard. First let us plan something nearby like maybe one of those islands nearby. Aaah, soaking in the sun on golden sandy beaches and swimming in the blue lagoons!” Must take out my good ol’, binoculars and clean the lenses.”

“Oh yes! So that you can ogle at those girls who seem poured into their bikinis. Tamari oomar joich, my senior citizen hubby!”

Perinbanoo chortled, “Put a lid on it Darab. We will not be taken for a ride by you Peeping-Toms. Vadhare bolso ne toe Paris na Moulin Rouge and Paradis Latin will be out of bounds for you rogues, in case we decide to go to Paris.”

Darabsha grumbled, *@%#$$* & ^^(*@*! (As I have mentioned before these words cannot be printed in a family newspaper like aapru PT, but rest assured they are quite graphic).

After self downing two beers, and Sorab slurping a couple of cups of yucky sweet teas, and later followed by lunch of tomato per eeda and prawn curry rice culminating into a fat slice of kumas, it was decided that we will go to Eastern Europe come May. Ruttie burst into the old Cliff Richard’s number “We’re all Going on a Summer Holiday,” while Perin did a jig of sorts with a couple of steps of garba thrown in for good measure. Sorab and Darab, who had rarely travelled beyond Udwada, sat gloomily mulling philosophically about the vicissitude of life.