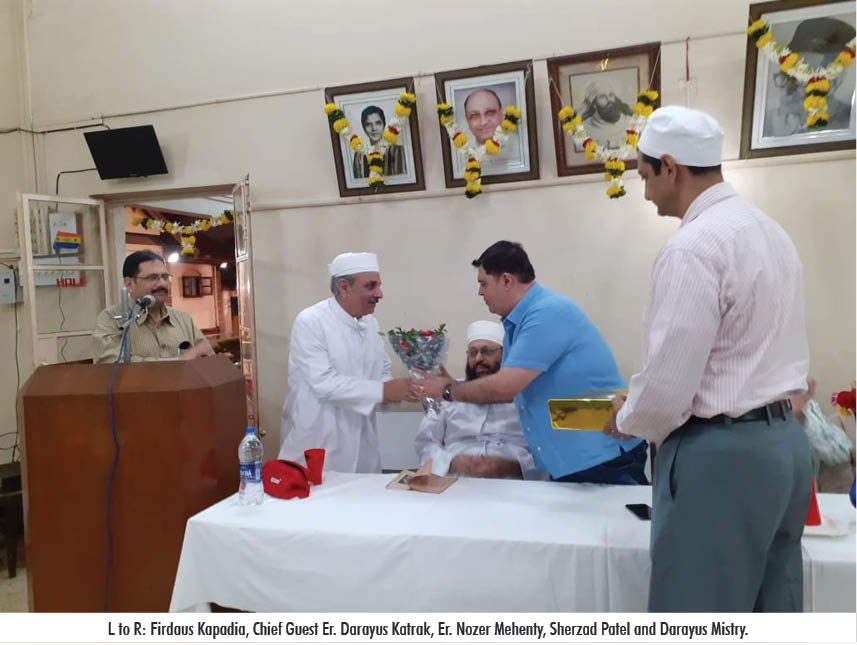 Precisely at 5:00 pm, the hallowed precincts of Bai Ratanbai Jamshedji Edulji Chenoy Dar-e-Meher, at Devlali, reverberated with the chanting from our holy scriptures, led by 16-year-old, Er. Rooyinton Mehenty – the quartet of priests comprised his father, Er. Nozer (Panthaky of the Agiary), Er. Freddy Dastur and Er. Navroze Minocherhomji. Rooyinton’s enunciation of the hour-long Jashan prayers was lauded by Er. Darayus Katrak, the Guest of Honour for the evening. Later, speaking on a multitude of subjects, at the adjacent Neterwalla hall, Er. Darayus began by invoking the blessings of Ahura Mazda.

Darayus Mistry, who introduced the sprightly 66-year-old Er. Darayus Katrak, enumerated his manifold achievements and spoke of him being a sought-after speaker, in India and abroad. Er. Katrak’s recent notable accomplishment was the setting up of the Behram Yazad Shrine in the Dadiseth Atashbehram complex – the first in India. Er. Katrak exhorted the gathering to bring back Parsipanu into our daily lives, both in speech and actions. Based on his numerous visits to Iran, he expressed the hope that Zoroastrians would someday, rule our forefathers’ kingdom again, in keeping with its revival of Zoroastrianism. He shared a brief account of the 12,500 years of the dynasties there, ranging from the Pishdadian to the Sassanian dynasties. He extolled the virtues of Ahura Mazda and shared witty anecdotes, explaining how our everyday word, ‘Sahebji’ actually meant ‘May you live a long life at the behest of Ahura Mazda’.

View all posts by By Special Correspondent Hoshang K Katrak →