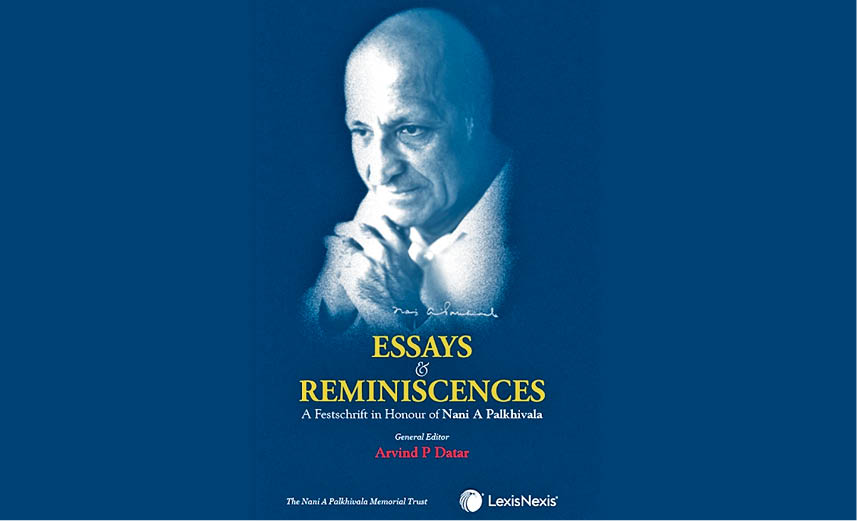 With 16th January, 2020 marking the birth centenary of India’s eminent jurist and economist, Nanabhoy (Nani) Ardeshir Palkhivala, the Nani A. Palkhivala Memorial Trust, in addition to organizing its annual lecture by eminent persons on this day, also releasing a festschrift (a collection of writings published in honour of a scholar) in honour of Nani Palkhivala. Titled ‘Essays & Reminiscences: A Festschrift in Honour of Nani A Palkhivala’, the book has been published by LexisNexis and was launched at the NCPA in Mumbai.

An Advisory Board consisting of Justice Sujata Manohar, Justice SN Variava, YH Malegam, HP Ranina and Arvind Datar collected contributions from several scholars, counsels and colleagues and friends of Palkhivala. Datar is also the General Editor of this commemorative book. The festschrift contains articles on constitutional and other laws, economy and governance, and reminiscences of persons who knew and interacted with Palkhivala.

The festschrift also contains few articles written by Palkhivala in his youth. These were originally published in several periodicals between 1937 and 1947. This is followed by reproduction of selected letters and correspondences, and other documents like written submissions, etc.

Born on January 16, 1920, Nani Palkhivala grew up in a middle-class Parsi household. Graduating from St. Xavier’s College in Bombay (now Mumbai), he excelled in academics although he struggled with a speech impediment. Unable to find work as a lecturer in Bombay University after his Master’s in English literature, he enrolled at the Government Law College, Bombay, where he found his true calling in life.

Nani Palkhivala rose high in the profession, arguing cases in commercial and tax law. Besides fighting a multitude of cases, he also wrote ‘The Law and Practice of Income Tax’ alongside Sir Jamshedji Behramji Kanga, a senior lawyer of repute, by the time he was 30 years old. More than six decades later, the book is still a point of reference for tax professionals in India.

Palkhivala was a man who revered the Constitution of India and the principles it stood for. “The Constitution was meant to impart such a momentum to the living spirit of the rule of law that democracy and civil liberty may survive in India beyond our own times and in the days when our place will know us no more,” he once said.

For a brief while Nani Palkhivala also served as India’s Ambassador to the United States during the Janata Party government from 1977 to 1979.

The prestigious Princeton University said “he [Nani Palkhivala] has courageously advanced his conviction that expediency in the name of progress, at the cost of freedom, is no progress at all, but retrogression. Lawyer, teacher, author, and economic developer, he brings to us as Ambassador of India intelligence, good humour, experience, and vision for international understanding….”