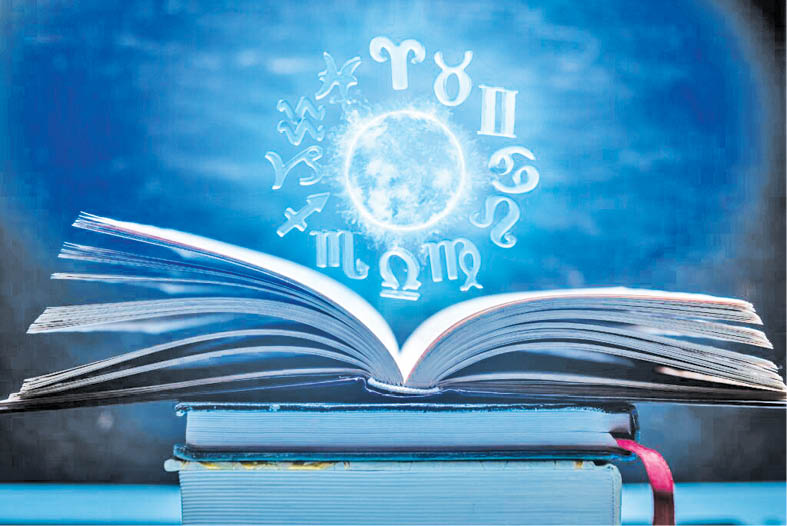 As regards occult studies about esoteric sciences and the ancient mysteries, one of the subjects taught in the secret-schools of ancient Egypt, Atlantis and Greece, was the relationship between the position of the stars at birth. Evolving over many centuries, astrology served as a way to explain events in one’s life which would otherwise appear arbitrary or inexplicable. The science is an interesting insight into the most ancient knowledge, known only to a handful of temple-priests and taught to very few, hand-picked and deserving students.

There are subtle connections between astrology and rebirth and there’s no conflict between these two sciences. However, both sciences emphasize that we can predict our future lives by our present actions and thoughts. Hence, the connectivity-link is ‘Karma’, which rules our lives. The stars merely map it out according to past actions, which have a direct impact on our future incarnations, indicated by our individual birth-signs.

The relation between astrology and incarnation was not just discussed by the ancient Orients. It was a common belief in the West also. It wasn’t simply related to a particular culture or cult. In fact, it makes us think that we are as interested in this subject as in our ancient world.

Unfortunately, the philosophy of astrology hardly finds any exponents in today’s age as man is more interested in material fortune than metaphysical sciences. Wise men have done much research over many centuries before they arrived at their conclusions. Brahmin sages in rock-hewn temples, Chaldean Magi on their lofty ziggurats, Egyptian priests in their stone observatories, did not devote thousands of years to the perfection of astrology merely out of curiosity. To them, the mysteries of the heavens were a revelation of divine principles and divine will. The pattern of stars in the sky was, to them, the very language of the gods!

The nations, most given to astrological research, also accepted the doctrine of transmigration of human souls. As these two important teachings, astrology and reincarnation, developed side by side, and the believers in the one teaching were also the exponents of the other, it is evident that no point of conflict exists between the belief in rebirth and the science of the stars.

The Hermetic philosophers – the wisest of the Egyptians, possessed profound knowledge of both these mysteries, as also Pythagoras, Plato and Aristotle – the noblest Greek thinkers. The Druid priests of Briton and Gaul included both – reincarnation and astrology, among their secret teachings. These noble men, revered as amongst the wisest and most virtuous of mortals, could not have been party to ignorance or superstition in these matters. We should therefore, consider their opinions with seriousness. Among Oriental nations, the science of astrology and the doctrine of rebirth are still included together in their philosophy of life. Old Hindu textbooks on astrology, attributed to the saints and rishis, contain hints and allusions to the method of determining the past and future states of existence from a natal horoscope. Among the lamas of Tibet, secret formulas are still used by astrologer-priests to determine the parts of the previous existence from the positions of the stars at the beginning of this life.

The problems which these Tibetan priests seek to solve are divided under three important heads:
1) The place of the spiritual entity among the nidanas or the sequences of consequences which cause the physical incarnation of the soul.
2) The level or plane of consciousness in which the entity functioned prior to its present life, which contributes the moral force to its present existence.
3) Such details and circumstances of the previous existence account for the karma or processes of retribution which are at work in the present existence.

In addition to the above, a horoscope may be erected for the moment of death by which the future state of the soul or entity is estimated. Altogether, this part of Astrology is concerned with that larger theatre of action of which the present life is but a fragment. To all philosophic people, man’s present state is the result of previous life and action. To understand this fact is to discover the cause of present conditions. Asiatic astrologers have practiced this part of the science for thousands of years, and their findings should be of interest to Western students of Astrology.

The principle behind the ‘Bhava Chakra’ or cycle of existence from the ceiling of the Lamaist monastery at Sikkim is entirely astrological. The outer circle of the future is divided into twelve parts which are termed nidanas or the causes which move the soul to rebirth. These nidanas are the twelve zodiacal signs, each one of which contains within it, an impulse to action or, as the ancients termed it, a cause of contract. 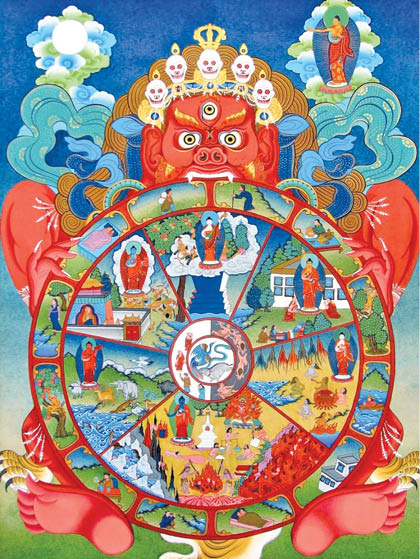 The symbolism in the Bhava Chakra in the Sikkim monastery, referred above, is this:
The central part of the design, representing the world or, more exactly, the conditions of consciousness which together make up the world, is divided into six parts. In the painting these parts or panels are filled with elaborate designs setting forth the conditions of souls in various levels or degrees of spiritual development.
For those who believe in the above philosophy, no proof is necessary and for those who do not believe, no proof is enough!!