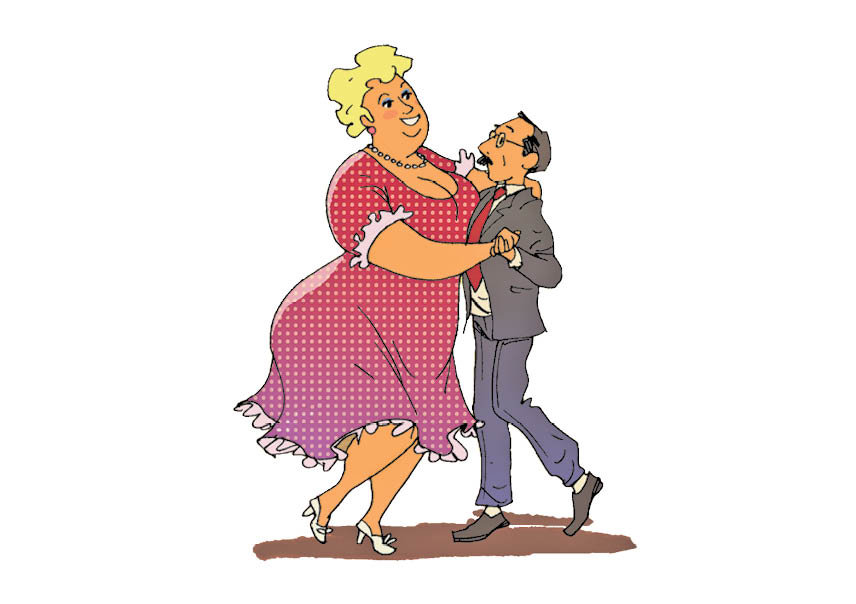 When Valentine’s Day arrives year after year, every year, in the middle of February, what’s in the air? LOVE!!  And who breathes that air? You, me and everybody, including Soli Sales-Tax. And what’s the result of breathing that air? You feel all romantic!!

And so our Soli went in search of a brand new lady-Valentine, since by now, he was fed-up of his girl-friend, Rustom Baug’s Faridafui. It was a case of Ghar ki murgi dal-chawal barabar! Luck favoured him as he stood in line at a bus-stop. He saw three fatakris in line and tried his luck with Fatakri No.1, singing his old childhood song – ‘Meri Jaan, Meri Jaan, Anaa Sunday ke Sunday’. The fatakri, thinking he was a beggar, said, “Oh my God! Such an old song! My grandpa used to sing it! Sing something else. I’ll give you one rupee per song.” So he started, ‘Lara Lappa, Larra Lappa…’ The fatakri insisted, “Sing a new song! So, Soli-bawa not only sang but also became personal with her by extending his crooked-arm, as if to escort her, singing, ‘Tun Tuna Tun, Tun Tun Tara – Chalti Hai Kya Nau Se Bara?’

The result? One tight slap across his face. So tight, so tight, that his spectacles flew off and landed at the adjoining bus-stop!  He collected them, wore them and immediately proceeded to Fatakri No. 2, singing the old Johny Walker number from the film, Madhumati, ‘Jangal Mein Mor Nacha – Kisi Ne Na Dekha..’ Fatakri No. 2 got annoyed as he came too close to her while singing. This resulted in her giving him a tight slap, but this time, clever Soli had the presence of mind to hold on to his spectacles while being slapped. In fact, by now, he had become slap-proof! “You idiot, go to the jungle if you want to sing such junglee songs!” she screamed. Solibawa, had become a little hard of hearing as a result of the two tight slaps and thought that this Fatakri wanted him to sing the mating-call of Shammi Kapoor from the film Junglee and hence, yelled, ‘Yaa hoo! Yaa hoo!! Chahey Koi Mujhe Jungli Kahey!” A kind man from the bus-queue gave him a two rupees coin, thinking he was a demented beggar.

Now Fatakri No. 3 in the queue was very kind-hearted and gave Soli a ten Rupee note. Soli, who thought no end of himself, mistook it as her desire to have his autograph and signed the ten-rupees note with his usual flourish as, ‘Sexy-Soli – When?’ He returned the note to the lady only to receive another OTS (Readers by now, know this means – One Tight Slap!!)

Despite being so unlicky in love, Soli consoled himself, ‘Apna time ayega!’ He also tried to build up his self- confidence by remembering the famous lines of Sonakshi Sinha from the film Dabang, ‘Sahib, thappad se dar nahin lagta – pyar se lagta hai!!’ Frankly, by now, he had become Thappad-Proof!! He also remembered his school-poem about King Bruce and the spider – If at first, you don’t succeed, Try Try again!! And so, he phoned Farida, whom he had saved for a rainy day saying, “It’s Valentine’s day and I’ve nowhere to go and nothing to do. Please may I tag along as always to wherever you and Hormusji are going?”

And so, Soli dressed up in his ancient blue Safari-suit, which looked like a baba-suit. The pant was too tight so he wore his brown pants. He teamed it with red socks (unwashed since God knows when), his grandpa’s pocket-watch and his animal print muffler, thinking that he looked natty, handsome and irresistible – virtually God’s gift to women of all ages, shapes and sizes! He tucked his vaas-marto tapkeer no rumal  in his chest pocket and off he went to the love-triangle romantic dinner for three.

Hormusji warned Farida not to let Soli have any drinks since he’d gotten drunk and the club management put Farida, the fatso,  on probation because of his obnoxious behaviour at the club-brunch! He suddenly spotted Frigid Frenymai on a near-by table. He went up to her and asked, ‘May I have the pleasure of this dance with you?’ Frenymai, with her Gujarati-medium background, was taken-aback since she was not fluent in English. Her reaction was, ‘Siddho-padhro dance karvano hoi toh karo; pleasure-bleasure kai malsey nain!’ He aborted the idea of dancing with Frenymai, zooming off to the next table where a single woman was sitting. Just to be on safe side, he asked, ‘Madam, do you speak English?’

The Lady: Of course, you silly man!

Soli: May I have the pleasure of this dance with you?

The Lady: Why not?

Soli: How come? See, I removed my socks and stuffed them in my breast-pocket along with my ‘tapkeer-no-rumal!

Lady: I can’t continue this. You stink!

So, Soli went up to another Parsi hottie, spreading his arms like Shahrukh Khan and saying, ‘SOLI – Naam toh suna hoga?

Meanwhile, Farida was fuming with anger that Soli was neglecting her and merrily flirting with pretty young things half her age and probably, only one- third her size. She went up to Soli, threw away his stinky socks and kerchief and ordered him to dance the Tango which was being played. Soli obliged and they danced the Tango while a big Parsi gang at another table said, ‘Quick! Look! A huge bull-frog dancing the Tango with a Pengo (shortie)!!’

Poor Soli, always unlucky in love! Even on the romantic Valentine’s Day, he was stuck with his jari-purana girl-friend! He had saved Farida for a rainy day, but it wasn’t even raining, since it was February!