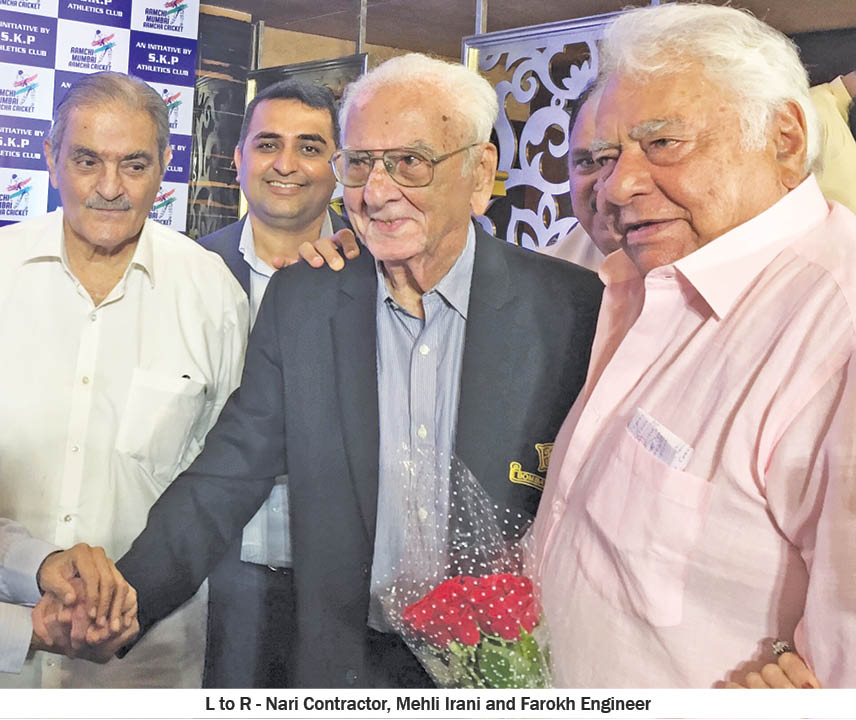 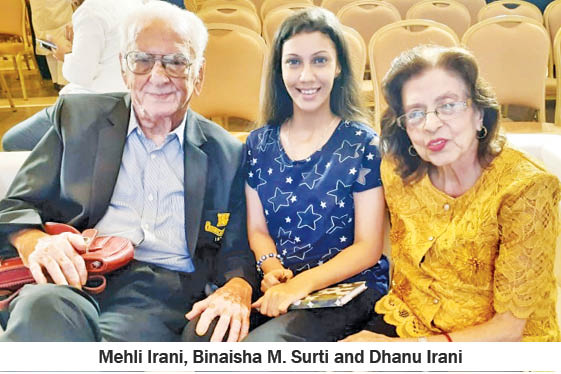 Mumbai produces numerous power-packed and talented cricketers time and again. The magic they generate through their game has always earned them respect and an immense fan-following across the world. India’s former ace cricketer, Mehli Irani, was one such loved and respected personality from Mumbai Cricket’s Hall of Fame. The ever-smiling and cheerful ‘Mehli uncle’ (that’s how he was lovingly addressed by the cricketing world) passed away on 3rd April, 2021, in Dubai. In addition to being a fantastic sportsperson and cricketer, he will forever be remembered and cherished by all who knew him, as a humorous, witty, courageous and intelligent personality, always spreading laughter and happiness.

He represented the then Bombay team in one Ranji Trophy match V/s Baroda in 1953-54 as also V/s visiting overseas teams. He captained St. Xaviers High School, St. Xavier’s College, Bombay University teams as well as the famous Parsi Cyclists, the Bombay Gymkhana team at home and on overseas tours. In 1953, Mehli Irani played against the visiting Commonwealth Cricket team, at Brabourne. In this match, at one stage Bombay were restricted to 63-4. Mehli and Ramnath Kenny put up a massive 170-runs partnership for the fifth wicket, with Mehli notching 68 and the latter, 143. He was the only cricketer to have played through 50 years of the Kanga League.

For over a decade, Mehli was on the Bombay Gymkhana and Kanga League sub-committees. In 1990, the Gymkhana honoured him on the completion of a half century in the game. He was also felicitated by the World Zoroastrian Organization in 2001. He retired from playing competitive cricket in 1997, at the age of 67.

The book, ‘My Innings In Mumbai Cricket’, by Vilas Godbole (as told to Pradeep Godbole), highly commends Mehli’s passion for the game, stating that even during his career’s twilight years, his enthusiasm remained as infectious! Just before retiring from local cricket, he played an interesting match, emerging a hero – with Bombay Gym needing four runs off the last ball V/s Dadar Union. Our grand old man, Mehli was on strike and hit a magnificent winning boundary for his team!

It’s been my privilege and honour to have personally known our very dear Mehli uncle over the years. His words of wisdom and advice on the game will remain with me forever. His loving wife, Dhanu, was his biggest support through his life. The lovely couple would daily visit the Bombay Gymkhana. I remember spending an incredible afternoon with them ove r delicious lunch of Dhansak, as he reminisced his good old cricketing days. A personal incident I’d like to share which highlights Mehli uncle’s kindness was when I was covering as well as hosting the Harris Shield Finals, at the Bombay Gymkhana. Seeing that my plate was overflowing with dual responsibilities, he sensed I needed a short breather from the chaos. He called me over to his table and said, “I know there’s plenty happening all at once but if you need a little break and want to switch off for a few minutes, remember I am right here. Come and have a cup of tea with me.” After a long tiring day, I took his offer and as I sat with him chatting, I felt rejuvenated in his presence. While sharing anecdotes, he mentioned, “I was the man who faced the first ever delivery at the Wankhede Stadium in Mumbai.”

Mehli Irani is fondly remembered by the cricketing fraternity. Speaking to Parsi Times, Ex-India Captain, Nari Contractor said, “We played lots of cricket together. He was my captain at St. Xavier’s College, at University and later at Parsi Cyclists. We won the Rohinton Baria Trophy in 1952 under him. He was an easy-going person who never got upset by defeat or overly happy by victory.”

Ex-India cricketer, Farokh Engineer shared, “Mehli was a wonderful person and a very dear friend. We played a whole lot for Parsi Cyclists. He was unique indeed and has left a lovely legacy for others to follow. He always enjoyed his cricket. Back then, we didn’t play for money, we played for the love of the game. I always admire legends like Mehli and Freddy Sidhwa from Dubai – it was purely their keenness that kept them going. I always looked up to Mehli, he will remain in our hearts forever.”

Former cricketer, Hoshang Dadachanji, added, “What a joy and pleasure it was to have played with Mehli for nearly 35 years for Parsi Cyclists, in Kanga League A Division. Always smiling, he created a jovial and sporting atmosphere and that is why all our opponents respected our team. I had a good opportunity playing under his captaincy as we won the All India University Tournament. Mehli, my dearest friend will be missed at the round table at Bombay Gym.”

Former India cricketer, Karsan Ghavri, added, “When I came to Mumbai in 1970, I joined ACC and Polly Umrigar was my mentor and guide and he suggested that I play for Parsi Cyclists. Mehli uncle, my first captain, once asked me to bowl during a match and all my deliveries kept going down leg side. He shouted from behind the stumps, ‘Aree batsman na tang pakadni!’ Not understanding what he was trying to say, I stopped bowling and went and caught the batsman’s leg tightly. He came up to me and said, ‘Aree su karech! I told you to bowl on his leg.’ It was such a hilarious incident on field that everyone started laughing. Further, during lunch breaks we would all go to Irani restaurant and have dhansak and later have some Golden Eagle beer jumbo bottles. After a full stomach, there would be plenty of misfields and dropped catches. That was the time Mehli’s colorful language would emerge on field. As a team, we were a laughing riot!”

Former cricketer, Vilas Godbole concludes, “He was an attacking batsman and great wicketkeeper too, as his stumpings were of high caliber and lightening-speed. His pull shots, flicks and square cuts were very powerful. I learnt a lot from him. It was Mehli who inspired me to play Kanga League for many years.”

Mehli uncle, will always have a special place in all our hearts. May his great soul rest in eternal peace!