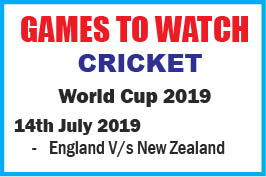 New Zealand In Finals: Indian fans were heartbroken after an 18-run defeat by New Zealand during the first semi-final of the ICC Cricket World Cup 2019 at Manchester, England. Even though all-rounder Ravindra Jadeja and MS Dhoni played well out, it was not meant to be, as India’s journey ended despite topping the table during the league stage. Man of the Match, Matt Henry’s (3-37) in his 10 overs ensured the Kiwis steal a victory in the all-important clash. Though rain played spoilsport on the main day, play resumed on the reserve day as New Zealand batted first notching 239-8 in 50 overs, courtesy skipper Kane Williamson’s 67 and Ross Taylor’s 74. Bhuvneshwar Kumar was the pick of the bowlers snaring (3-43) while Jasprit Bumrah, Hardik Pandya, Ravindra Jadeja and Yuzvendra Chahal picked one wicket each. In reply, India faltered early on, reduced to 5-3 in 3.1 overs with Rohit Sharma, Virat Kohli and KL Rahul leaving without big scores. Rishabh Pant was caught on 32 while Dinesh Karthik perished on 6. Then Ravindra Jadeja and MS Dhoni stitched a 100-plus partnership as the former scored 77 while the latter made 50 before being run out by Guptill. Finally, India’s dream came crashing down as they ended with 221 in 49.3 overs.

England Enter Finals After 27 Years!: An outstanding show from Man of the Match Chris Woakes (3-20) in his 8 overs, coupled with great knocks from Jason Roy (85), Joe Root (49*) and skipper Eoin Morgan (45*), ensured a massive win by eight wickets for the host team England, against defending champions Australia, during the second semi-final at Birmingham, England. This is the first time since 1992 that England have made it to the World Cup finals. Batting first, Australia scored 223 in 49 overs as Steven Smith top-scored with 85. Along with Woakes, Adil Rashid picked 3-54 while Jofra Archer grabbed 2-32. England cruised to victory with 226-2 in just 32.1 overs. England face New Zealand in the finals at London.

USA Win Women’s Football World Cup: The United States of America won the Women’s World Cup for a record fourth time as they overpowered Netherlands in Lyon beating them 2-0 in an epic finale contest. Megan Rapinoe’s penalty during the 61st minute while Rose Lavelle’s excellent winning goal during the 69th minute gave the defending champions a victory in the second half of the match.