The Late Maneck Golvala T10 Cricket Tournament, meticulously organized by the Vice President and Cricket Secretary of Parsee Gymkhana (PG), Khodadad Yazdegardi, took place from 19th to 21st April 2019, at the PG grounds, Mumbai. Chief Guest for the opening ceremony, Rusi Bhumgara, was impressed with the good number of Parsi participants, and encouraged the teams to play hard and fair. Eight teams were divided into two – Group ‘A’ comprising Navsari A, Nagpur (debutants), Surat and Parsi Cyclist; and Group ‘B’ comprising defending champions Parsee Gymkhana, Navsari ‘B’, Secunderabad and Malcolm Baug. 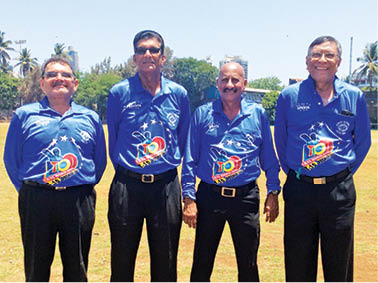 Speaking to PT, skipper Zervin said, “Parsee Gymkhana gave us a great opportunity by inviting us to the tournament. Khodadad provided the best facilities, making us feel at home. Winning in the semis and the Finals is nothing short of a miracle – to become champions in our first go! I believe that the trophy should be shared, as both sides fought till the very last ball and the game could have gone either way.”

“I would like to thank PG President Mehli Golvala, Managing Committee and Cricket Committee members, Vivek Chapekar for the sitting arrangements, Chairman and Managing Director of Spenta Group of Companies Aspan Cooper for sponsoring the event year after year, Ex-ICC panel umpire Shahvir Tarapore who came all the way from Bangalore to officiate, other umpires, match officials, physio, scorer, cricket commentator Binaisha M. Surti, caterer Khorzad Bhesadia and Cherag Irani for looking after the hospitality department and Parsi Times for the coverage. It was great to see Nagpur clinching a win. I will work harder to make the tournament bigger and enjoyable for years to come,” said Khodadad. 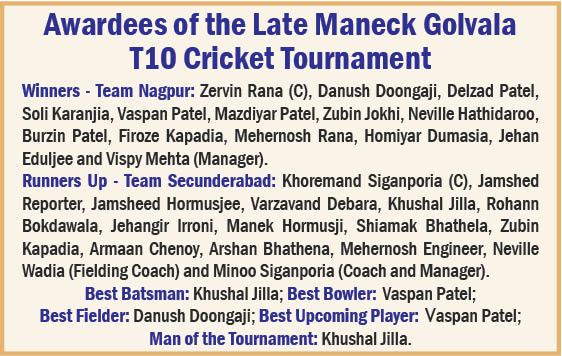