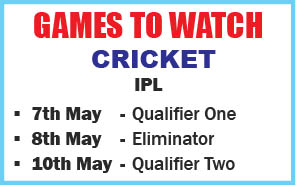 Mumbai Indians beat Sunrisers Hyderabad in Super Over: A thrilling super over finish at the Wankhede Stadium, in Mumbai, ensured Mumbai Indians two more points and a place in the play-offs, making it the third team after CSK and DC to qualify. Hardik Pandya and Pollard ensured that MI crossed the line comfortably, after the former struck the first delivery of Rashid Khan for a six. A single was taken in the second delivery while the third one sealed the deal with two more runs in the super over.  Earlier, batting first, MI posted 162-5 in 20 overs as Quinton de Kock remained unbeaten on 69. For SRH, Khaleel Ahmed picked 3-42. Chasing down the total, SRH lost a couple of wickets in the process, but Manish Pandey kept their hopes alive, smashing the last ball for a six to end with 71 not out. At this stage, SRH and MI’s scorers were tied.  But it was just not meant to be for the Orange Army, as the Men In Blue sealed a comfortable win in the end.

CSK Thrash Delhi Capitals, Top Points Table: Leading from the front, skipper and Man of the Match, MS Dhoni and his men in yellow, Chennai Super Kings (CSK), finished off their last league game on home turf, with an 80-run victory against Delhi Capitals (DC), guarding their fortress at the MA Chidambaram Stadium in Chennai. Batting first, CSK got off to a slow start initially, but later held on and produced a late flourish of boundaries, reaching a fighting total of 179-4 in their 20 overs. Faf du Plessis started off well with 39 before being caught by Dhawan of an Axar Patel delivery. There on, Suresh Raina (59 off 37), Dhoni (44 off 22) and Ravindra Jadeja (25 off 10) took the attack back to the opposition. For DC, Jagadeesha Suchith snapped up two wickets while Chris Morris and Axar Patel took one wicket each. In reply, DC got off to a good start and were comfortably placed at 52-2 in 5.3 overs before CSK’s spinners struck back. They were reduced to 99 in 16.2 overs, as Captain Shreyas Iyer top scored with 44. Brilliant efforts from Imran Tahir (4-12) and Jadeja (3-9) sealed a win for the defending champions.

India Ends Wrestling Campaign With Pride!: India wrapped up the Asian Wrestling Championships on a high note with Harpreet Singh maxing a Silver in the 82 kg category, while Gyanender won the Bronze in the 60 kg group, on the final day of the competition. India’s tally of 16 medals included one Gold, three Silver and four Bronze by Men’s Freestyle wrestlers; and four Bronze medals by the women and three Silver and another Bronze by the Greco-Roman wrestlers.