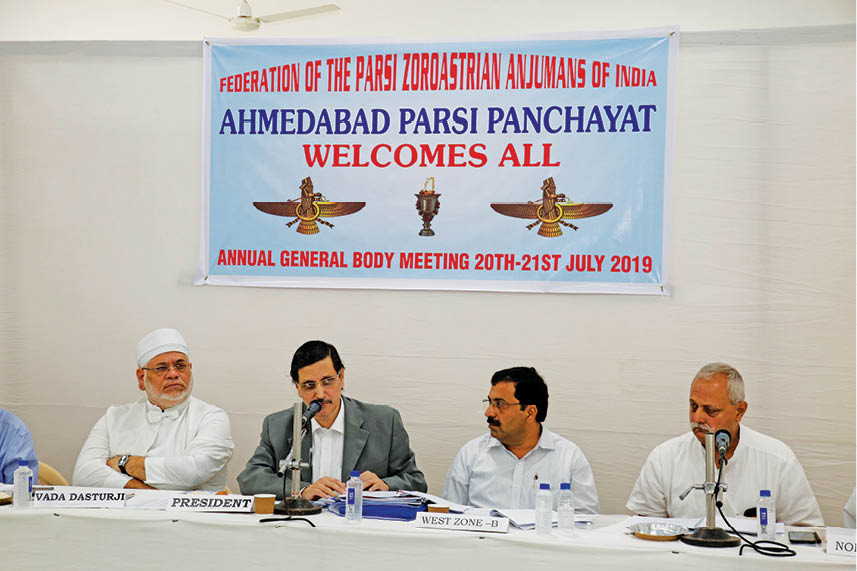 On the 20th and 21st of July, 2019, The Federation of the Parsi Zoroastrian Anjumans of India (FPZAI) held its Annual General Meeting and  Executive Council Meeting in Ahmedabad (Gujarat), at the Sir Navroji Vakil  Hall, where 60 Representatives representing 38 Anjumans from all over India were present, including Bombay Parsi Punchayet (BPP) Chairman Yazdi Desai and Trustees Armaity Tirandaz, Viraf Mehta and Xerxes Dastur; Office Bearers of FPZAI, as also two representatives from the Federation of Zoroastrian Youth Associations (FOZYA). Vada Dasturji Khurshed Dastoor, as the Parsi representative on the National Minorities Commission, was also present. The Meeting was chaired by FPZAI President, Yazdi Desai. Ahmedabad had last hosted the FPZAI Meeting way back in 2004, when Areez Khambatta was the Ahmedabad Anjuman President. The last time an FPZAI meeting was held outside Mumbai was in 2011, at Valsad, and therefore this FPZAI Meeting in Ahmedabad was a welcome change from always having it at Mumbai. 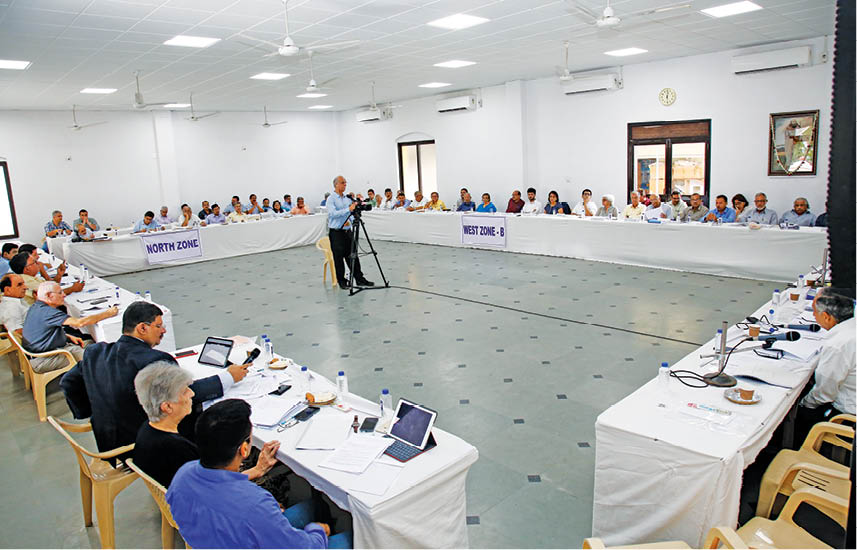 Brig. Jahangir Anklesaria, President of Ahmedabad Anjuman, and his team played the perfect hosts. All delegates who needed accommodation were housed at the famous Cama Hotel. The venue of the meeting, Navroji Vakil Hall, a newly air-conditioned for the comfort of all the delegates and the food catered for the two days was delicious.

The meeting started on an auspicious note with a Humbandagi led by Vada Dasturji Khurshed Dastoor. Elections for various posts were held at the meeting. There were a couple of heated debates regarding certain procedural points but were effectively resolved. Elections were held for 2 posts – that of Vice President of West Zone A (Maharashtra Anjumans) between Mancher Mubarakai of Dahanu and Parvez Irani of Iranian Zoroastrian Anjuman. Pervez Irani won by one vote. The other election was for the Vice President’s post of West Zone B (Gujarat Anjumans) between Sam Chothia of Valsad and Brig. Anklesaria of Ahmedabad. Sam Chothia won with a convincing majority. All the VPs of the other 3 Zones – North Zone (Tehmtan Anklesaria), South Zone (Cmd. Bhada) and East Zone (Russi Jeejeebhoy) continued in the absence of any other nominations.

Following this, there was a healthy exchange of thoughts and discussion on various issues pertaining to our Community, with special focus on community properties in mofussil areas which are in danger of being encroached upon and lost to the community.  The community is unable to legally or physically protect its properties, especially in areas with hardly any Parsis left. Many suggestions and ideas on how to deal with this problem were discussed. An important point which was unanimously echoed by all was that these defunct Anjuman properties should be monetized, instead of being lost to the community. It was also strongly felt by all that the unnecessary legal objections made by a couple of community members against monetizing community properties needed to be dealt with firmly and collectively by the community.

Sam Chothia, as CEO of the Defunct Anjumans Committee (DAC), circulated a 23-page report on what the DAC has done since the last FPZAI meeting in 2017. H also walked the delegates through the report, page by page.

President Yazdi Desai suggested that the present office bearers of FPZAI continue in their positions – Noshir Dadrawala and Farrokh Rustomji as Jt. Hon. Secretaries and Zarir Bhathena as Hon. Treasurer. Khurshed Pastakia of Borivli Anjuman was appointed by the Executive Council as Jt. Treasurer in place of Brig. Anklesaria, who did not wish to continue as Jt. Treasurer. It was decided to continue with the present (DAC) headed by its CEO Sam Chothia. It was also decided to resurrect the FED newsletter and have news and updates relating to the FPZAI periodically sent to all Anjumans.

Tehmtan Anklesaria, Vice President of North Zone suggested that the FPZAI should write to the Central Govt, thanking them for helping to safeguard our properties – especially in Surat and Rajkot. President Yazdi Desai suggested that the customary agenda item of individual Anjumans, speaking about specific issues and problems faced by them, should not be discussed and instead Anjumans should write their specific problem or issues to the FPZAI Executive Secretary, Cawas Panthaki. These would then be published in the proposed FED newsletter and Yazdi Desai assured the delegates that the FPZAI would solve their problems within a year.

Brig. Anklesaria and his team had organized a special touch of entertainment, for the 20th July evening. The delegates were treated to a hilarious play titled, ‘Kutra Ni Puchri Vaaki’ performed by Surat’s famous Yazdi Karanjia troupe. All in all, it was a successful meeting, very well organized by Brig. Jahangir Anklesaria and his dedicated team.