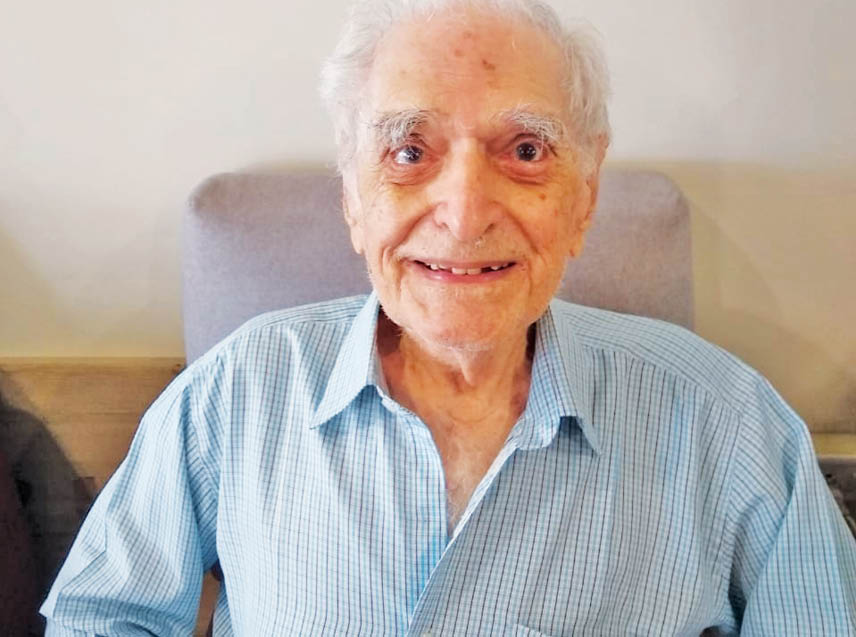 Something special awaits each of us every day, all that one needs to do is recognise those wonderful moments, cherish them, be grateful and keep moving forward with a positive attitude. It is all about being real, humble, kind and touching the lives of others. The manifestation of this essence is our very dear, former cricketer, Russi Cooper. Parsi Times Sports Reporter Binaisha M. Surti was honoured to have interviewed the legendary cricketer, who recently made headlines for reasons that bring pride to our community. Binaisha brings to you his special and inspirational journey as he creates history in the cricketing fraternity.

Legendary cricketing hero, Rustom Cooper, 97, fondly known as ‘Russi’… has carved his own matchless niche in the industry, having created new records by becoming India’s oldest living, first class cricketer, after Vasant Raiji passed away. He is also now, the only living Indian cricketer to have played in the Pentangulars. The Pentangular League was a cricket tournament where different communities faced each other on the ground. Also, English County Cricket Club, Middlesex, recently announced that Cooper, born on 14th December, 1922 became Middlesex’ s oldest first-class cricketer, aged 97 years, 183 days. This record was previously held by James Gilman, who passed away on 14th September, 1976, at 97 years and 182 days. 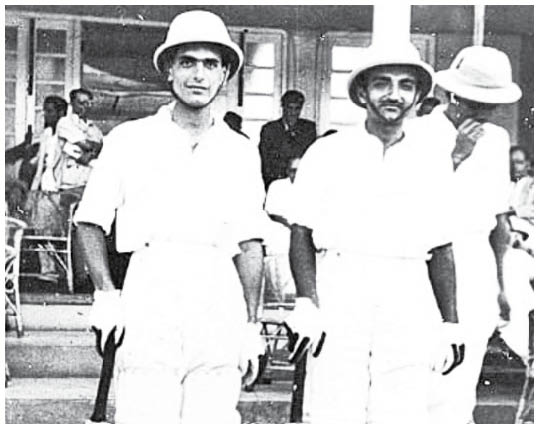 The website further informs that Cooper made appearances for Middlesex between 1949 and 1951. He made his first-class debut for the club V/s Cambridge University, at Fenners, in May 1949, off which he contributed 36 in their first innings total as they declared at 402-4. He ended his first-class career with a good batting average of 52.39 in 22 games, with three centuries and 10 half tons. Between 1946 and 1953, the unstoppable Russi Cooper added another colourful feather to his cap by also playing club cricket for Hornsey. He stood out with his elegant batting style, accumulating a huge number of runs… scoring 5,968 at a Bradmanesque average of 85.25!

Speaking to Parsi Times about how he was struck by the cricketing bug during his young days, he shares “My father was very interested in sports and wanted me to play. Back then, we lived in Bilimora, Gujarat, where my father was in charge of the textile mill. There were arrangements to play tennis, badminton, cricket and table tennis in the estate of the mill. All these facilities were available and I took advantage of them. He always encouraged me and backed me to play cricket.” During his playing days, this swashbuckling batsman was greatly influenced by Vijay Merchant and Hazare’s approach to their game. 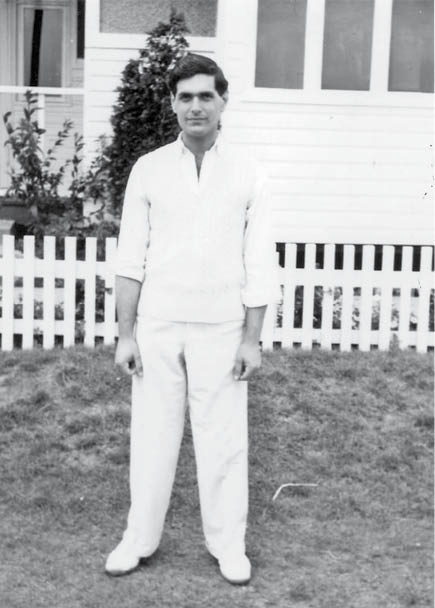 Reminiscing the good old days, when he represented Parsis in the Pentangular, from 1941-42 to 1944-45, then Bombay from 1943-44 to 1944-45 and Middlesex from 1949 to 1951, he nostalgically says, “I played twice for our Parsis, after which the pentangular was scrapped. I then went on to play cricket for Bombay in Ranji Trophy. It was a very enjoyable experience back then, but it was very different playing in Ranji Trophy V/s playing for Middlesex. When I started playing for the Middlesex, I was working. County cricket is played six days a week while Sunday is rest day. For me it was exactly the opposite where I would just get the Sunday. I had to take leave to play cricket. My management was helpful and gave me casual leave to play three-day matches.”

It is always difficult getting into the power packed, ‘Bombay Ranji Team’, and earning a place in the playing X1, especially in a final, and batting higher in the line-up always speaks volumes. Cooper recalls, “I took up cricket since I was nine years old and decided that it was my go-to sport. I took it up seriously when I was in St. Xavier’s College. I learnt all about batting from our coach, Bahadur Kapadia. He was excellent and also coached cricketer Rusi Modi, who I shared a great association with. When I was in my final year, Modi had just joined the college in the first year. I was taken in the Bombay team as a pure batsman. I was quite surprised when I was asked to bat at number 10, such was the strength of the Bombay team even back then. I thought that I would not have any chance to score runs batting lower down the order. But Vijay Merchant was at the other end scoring a huge amount of runs himself, so I got plenty of scope to play and that was an advantage. When I scored 89, they promoted me to number five against a strong Holkar team in the Ranji Trophy final, played at the Brabourne Stadium (CCI) in 1945.”

Describing the iconic Ranji final, the yesteryear cricketer batted at number five for Bombay scoring 52 in the first innings and 104 in the second, V/s Holkar in 1945. Cooper told Parsi Times, “It was an iconic game which was a play to the finish contest. Those days, Ranji Trophy finals were held in that fashion and not restricted to specific days. Both the teams were very strong. The Holkar team also had Denis Compton playing for the side, who scored a double century (249*) while for us it was Vijay Merchant who made a double ton (278). That, in turn, gave me a chance to score my century. We had four Parsis in our team during this game – with me were Rusi Modi, Jehangir Khot and Keki Tarapore. The Brabourne stadium was packed for all six days and not a seat would be available! It was a very memorable contest which I experienced in front of a crowd of 30,000 people.”

Apparently, these two innings turned out to be career-changing knocks for Russi Cooper. “This game was my last match, because after that the war was over and I went to London for further studies. Even when I was studying in London School of Economics, I was playing cricket for the college,” he shares.

Destiny plays its own part in everyone’s life and for this cricketing legend, it was no different. From playing against Denis Compton in the final to Cooper later sharing the dressing room with him at Middlesex, was a complete turnaround of events for the talented gentleman. It was Compton who spotted Cooper as a special talent way back then. Besides Compton, the historic club Middlesex’s line up also included Bill Edrich, Jack Robertson and Gubby Allen. “They were all professional cricketers and very friendly with me.  Compton was stationed in Bombay during the war. We also played against each other in the Pentangular where Compton represented the Europeans and I played for the Parsis. He was one of the best cricketers during his time and was extremely popular in England. When he went back after the war, he realised that I was staying in London and could play for Middlesex and from there on, there was no looking back.”

When asked if his era of playing cricket was very challenging and if he faced stiff competition on the field, Cooper humbly replied that his era was indeed a very enjoyable one where players were friends. “In fact, there was no cut throat competition, we all used to stay together… united as one team and we truly enjoyed each other’s success and played to win.” He also states that his all-time favourite partner was Vijay Merchant and he enjoyed batting with him on field.

Russi Cooper was a wizard with the bat who rather played his shots along the ground than opting for huge big hits outside the park. He adds, with a laugh, “Going big was never my style. As a batsman, I preferred playing on the front foot rather than the back foot.” His theory was that after scoring a six, the batsman could very well go out in the next delivery, so instead, one should judge and play every ball correctly on its merit and instead try hitting fours.

Elaborating on his training sessions back then, Cooper recalled “I used to practise every day when I was in college. There used to be a number of clubs in Mumbai’s Azad Maidan where they would conduct net sessions. I would practise my batting there.”

After all these years he still has a special connection with cricket, “It has always been an all-time favourite game of mine. I watch Test Matches as that is my favourite format and I am happy to have gotten the opportunity to play that long during my era. I was very good friends with Madhav Apte, who also played for India. We would meet and discuss a lot of things. I also shared a great friendship with Vasant Raiji who recently passed away at 100. Both of them were members of CCI and we would meet there in the evenings as they had also retired by then.”

Cooper has indeed been fortunate to have had the privilege of watching the greatest cricketer of all time – Don Bradman – play three good innings, including a century, in 1948. He also watched him play his final innings during his farewell tour to England in the year 1948. “I was very keen to watch him play at the Oval in London, so I also stood in line outside the stadium from 6:00 am, in order to make sure that I got in. I was indeed fortunate enough to watch him play even on previous occasions. He loved to dominate the bowlers but when he got out in the second ball it was disappointing for all his fans.”

As we approached the end of our wonderful conversation, Russi Cooper mentioned another Rusi, and it was none other than famous all-rounder of the Indian Cricket Team, our stalwart Rusi Surti – who was a very dear friend of his and had attended Cooper’s 90th birthday party. “We played a few friendly games together at CCI Brabourne Stadium in Mumbai. Surti was a brilliant fielder and a very fit person. When he had come down from Australia, I invited him on the occasion of my birthday and he had attended my party,” said Cooper.

Russi Cooper’s dedication and game ethics have always been exemplary. He would have been a part of Team India but destiny had other plans for him as he went to England for higher education. The personification of a gentleman, since cricket is a gentleman’s game, Cooper remains classic – calm, composed and jovial while sharing his extraordinary journey. Though he has achieved great milestones in his career, his humility and being so down to earth despite his monumental achievements set the perfect precedent for future generations of cricketers. The entire Parsi and cricketing community continues to be very proud of his achievements and wishes him plenty more success and a happy and healthy life.