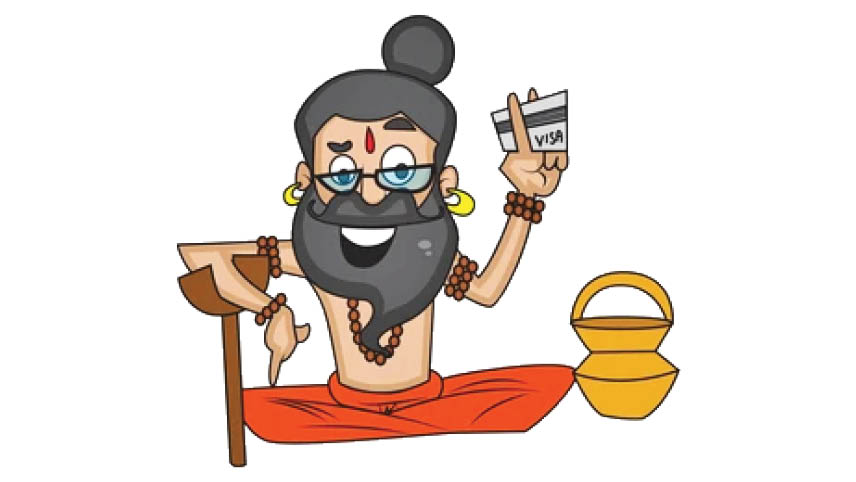 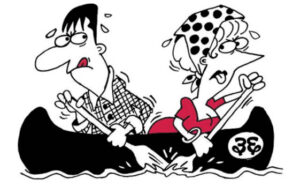 For 50 years, Dhanjisha and his wife, Dolly Ding-Dong had an ideal marriage based on togetherness. They did everything together as a couple – be it yoga, swimming, reiki, golf or Shiamak Davar’s Dance classes. Everyone envied this Rab Ne Banayi Jodi and called them ‘Made for each other’. Unfortunately, these days, they are more ‘Mad at each other’, having silly fights over sillier things, like…

Dhanjisha: Why can’t you cook like other wives so we can fire the cook and save some money?

Dollymai: Why can’t you kiss passionately like other husbands so we can fire the driver?

OUCH!! That hurt Dhunjisha like a dentist’s drill on an exposed nerve and he turned to tarot-card-readers, healers and even did a past-life-regression to put the spark back in his marriage. As luck would have it, he met a self-appointed Godman who called himself BABA – just Baba! Actually, he was a Bogus Baba, a con-man and a cheap roadside magician who produced flowers from thin air (actually from his sleeves) for his female-followers. Gullible Dhanjisha spoke very highly of him and one morning, over sips of tea, he said…

Dhanjisha: You know, in yesterday’s lecture, Baba said that in Heaven, husbands and wives live separately.

Dolamai: No thank you. I believe only in my Zoroastrian religion. Tell me, what is lacking in our religion that you need to go elsewhere?

But Dhanjisha went on and on about Baba being the messenger of God, so, just for her own peace of mind, Dollymai went and sat with 25 other ‘chelas’. There, she sat quietly for some time and then shouted loudly for all to hear, “Baba, you must be unmarried because you look too happy to be married!”

Everyone laughed while some devotees said “Shoo! Keep quiet!”

Dollymai: Baba, either get married or become a BPP Trustees – sab kuch mil jayega!! All the problems and tension you want.

Babaji (angrily): I have powers to make anyone disappear.

Dollymai: I want to test your powers. Can you make Dhanjisha disappear?

Baba went away in a huff and poor Dhunjisha went behind him to apologise for his wife’s behaviour. Baba was pacified as he had great pity and compassion for married Parsi men and gave Dhunjisha a coconut and some green chillies which were to be kept away from Dollymai.

Dhanjisha hid them on a shelf in the kitchen. The very next day, while cleaning that shelf, Dollymai found everything and prepared lovely kolmi-na-curry-rice and green chutney. After lunch, Dhanjibawa asked Dollymai: “What happened to Baba’s coconut and green chillies? Have you seen them? I had hidden them in the kitchen.”

Dollymai: You just had them for lunch! You know by now that you can’t hide anything from me in this house! Now go to your Baba and he will give you something else since he manufactures everything from pure ghee, chavanprash, shampoo, face-cream, soap, cooking-oil, atta – the works!! And he has the audacity to blatantly advertise these on TV as a cooking-oil that reverses cholesterol, a soap that cures pimples and an atta that is fortified with all the vitamins and minerals from A to Z!

Not to be daunted, Dhanjisha returned to the Baba who gave him another huge coconut saying, stand on one leg, breathe in and out six times, relax, hold the coconut out of your window and say this mantra:

Dhanjisha:  Arrey Babaji, you are an Antaryami – all knowing! For long, I was suspecting my ground floor neighbour, Minocher’s Saali of putting nazar on my happy marriage because she never missed a chance to say ‘What a lovely couple’, ‘What a happy couple’. How did you know that it is that frustrated spinster’s boori-nazar which is extinguishing the spark of my happy marriage? (Actually, Dhanjisha had himself once mentioned that Minocher’s Saali stays in the same ground floor flat but had forgotten about it).

Dhanjisha did as he was told. He stood on one leg, held the coconut , stretched out his hand out of the window and recited the mantra but Hai Re Kismat, the coconut slipped and fell on Minocher while he was watering the ground-floor garden outside his house!!

Minocher fainted and his wife Mani Mindhi, screamed: Koi khasroo lavo, Chappal laavo!! The most loving neighbours were only too glad to oblige and threw old shoes and chappals from their windows which were placed near Minocher’s nose and he was revived.

As this goes to the printing press, no case has been registered and as Shakespeare said, it was a “Much Ado About Nothing’ and a ‘Comedy of Errors’!